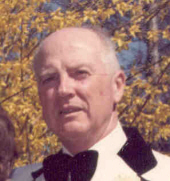 Gordon E. 'Joe' Adkins, age 86, of West Haven, passed away May 29, 2011 at Connecticut Hospice in Branford. Joe was born in New Haven on October 11, 1924, a son of the late Raymond & Belle Geer Adkins. He is survived by his wife, Marjorie Taylor Adkins; his daughter, Deborah Vallas & her husband David of Guilford; his son, William Adkins & his wife Lisa of Portland; his grandchildren, Kelly Ferro & Carmen Ferro; his great grandson, Christopher Palmieri and many loving nieces and nephews. Joe was predeceased by his sisters, Ruth Braese & Ethel Streitwieser and brothers, Raymond, Richard and Donald Adkins. He was a welder retired from the J. F. Barrett Company and a WWII U. S. Army Veteran. Joe was an avid walker along the Beaches of West Shore and in his neighborhood of Colonial Park. He will be greatly missed by his family and many friends. His Funeral Service will be held at 11:00 AM on Friday, June 3, 2011 at the BEECHER & BENNETT - TAYLOR FUNERAL HOME, 410 Campbell Ave., West Haven followed by his burial in Oak Grove Cemetery. Friends may also visit with his family at the funeral home on Friday morning from 9:00 to 11:00 AM. Contributions in Joe's memory may be made to the Leukemia Society, 300 Research Parkway, #310, Meriden, CT 06450-7137.