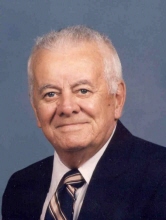 Gordon Kendrick, 86, of Pilgrims Harbor, Wallingford formerly of Dunn Rd., Hamden, passed away on March 12, 2006, the beloved husband of 40 years to Helen Rebucci Kendrick. Born in New Haven, April 8, 1919 a son of the late Charles and Lena Bechstein Kendrick. Gordon proudly served his country during WWII while in the Army. He worked for Macalaster Bicknell in New Haven for 47 years and was a member of the Mt. Carmel Art Association. After his retirement he had enjoyed his free time playing golf and honing his artistic abilities as an amateur artist. Even more important to Gordon, was sharing quality time and love with his grandchildren. Besides his wife, Gordon leaves his daughters, Lisa Crosby and her husband, Keith of Monroe, and Paula Rebucci of Wallingford, his sons, Michael Rebucci and his wife, Kim of Wallingford, and Wayne Rebucci of Greer, SC. His grandchildren, Emily and Andrew Crosby, and Jessica, Paul, Jeff, Tina, Tony, and Gracie Rebucci. He was predeceased by two brothers, Charles and Alan Kendrick. Funeral service at BEECHER & BENNETT, 2300 WHITNEY AVE., Hamden, Wed., March 15, 2006 at 7:00 p.m. Friends may call at the funeral home on Wed., from 4-7 p.m. Burial will be private. Memorial contributions may be made to the American Cancer Society, 538 Preston Ave., Meriden, CT 06450.