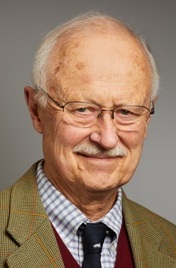 Gordon M. Shepherd died peacefully on June 9, 2022, at Yale New Haven Hospital. He was born in 1933 in Ames, Iowa to Geoffrey Seddon Shepherd and Eleanor Murray Shepherd. He was a Yale neuroscientist of international stature known for his work on the organization of neural circuits in the brain and in particular how our sense of smell works. His work and family were central to his life. He will be deeply missed by his wife Grethe Shepherd, son Gordon M.G. Shepherd, daughters Kirsten Shepherd-Barr and Lisbeth Shepherd, seven grandchildren, three siblings, and an international network of friends, family, former students, and colleagues.

Known for his wisdom and gentle sense of humor and often called a Renaissance man, Gordon’s curiosity and passion for learning extended beyond science to all the humanities and arts and especially poetry. Widely traveled, he cherished the summerhouse that he and Grethe built in Denmark. He became fluent in Danish and spent summers with family there.

Gordon was a key contributor to an area of research called the “neuron doctrine” that shaped how we understand the brain. His work helped elucidate the properties of neuronal dendrites, spines, olfactory processing, and cortical evolution, and helped establish the foundations for integrative neuroscience, computational neuroscience, and neuroinformatics. He is credited with inventing the term “neurogastronomy” and published paradigm-shifting books from The Synaptic Organization of the Brain, considered a classic through five editions, to the more recent Neurogastronomy and Neurooenology, connecting our sense of smell and activity in our brain with our experience of both food and wine. (This NPR article quotes Gordon as saying the flavor of wine “engages more of our brain than any other human behavior.”)  His studies with Wilfrid Rall and later with Robert Brayton and many others were foundational in the field of computational neuroscience.

Gordon was a graduate of Iowa State University, Harvard Medical School, and the University of Oxford. He established a highly successful research lab at Yale in 1967, which he led until retiring in 2019, also serving as Deputy Provost for Science. His research thrived with the continuous support of NIH for over 45 years, and he published over 300 articles and eight books. He was the Editor-in-Chief of the Journal of Neurophysiology and The Journal of Neuroscience and was the recipient of numerous international awards including honorary degrees from the University of Copenhagen and the University of Pavia. Gordon was a Fellow of the American Academy of Arts and Sciences, and past president of AChemS and the Cajal Club which recognized him with its Lifetime Achievement Award.

The Society for Neuroscience publishes autobiographies of notable neuroscientists, and you can see his here.

Gordon was a dedicated teacher and loved working with graduate students in particular. Just before his death he shared his credo for the “life of the lab” with family members: “A graduate student’s commitment – I seek training in methods to reveal the mechanisms of nature, which requires passion on my part for extending mental efforts under the discipline and criticism of experts in those methods. I regard my results as belonging equally to those in society who have supported me as well as those who benefit from my research. I work with my mentors not as a servant but as a loyal colleague and friend. I will practice collegiality, in which competitors are also colleagues, which is at the heart of basic research. Collegiality defines basic academic research as a global enterprise which knows no boundaries of nationality, religion, race, gender or language, in which all work for the common good. The common language of basic research is truth, which rises above all else.”

A memorial is planned at Yale in the fall. In lieu of flowers, donations can be made in Gordon’s name to: