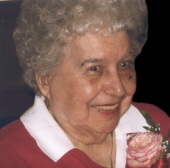 Grace Margaret Serio, age 94, formerly of Hawthorne Ave., Hamden, passed away Thursday, October 15, 2009 in New Haven. Grace is the widow of James A. Serio, Sr. She is survived by her daughter Eleanor S. & her husband Thomas Hylinski of Orange; sons Richard A. Serio & his wife Joanne of Wallingford & Edward J. Serio of North Haven; sisters Mary Ventura & Jean Rascati both of East Haven, Helen Proto of Santa Rosa, CA, & Josephine Collins of Anaheim, CA, and a brother Richard Esposito of Absecon, NJ. She is also survived by grandchildren Steven and Gregory Hylinski, Christopher and Paul Serio and Torri Serio Batzinger, and a sister-in-law, Norma Esposito of East Haven. In addition to her husband, Grace was predeceased by her son James A. Serio, Jr; sisters Rita Conte, Ann Reddington and Esther Iannuzzi; brothers Frank and Orlando Esposito and her grandson Richard Serio, Jr. A daughter of the late Joseph and Rose Pardo Esposito, Grace was born in New Haven on June 8, 1915. She had been a seamstress in the New Haven area for 60 years. Funeral from BEECHER & BENNETT FUNERAL HOME, 2300 Whitney Ave, Hamden, on Monday, October 19th at 9:30 am. followed by a Mass of Christian Burial celebrated in St. Rita Church at 10:00 am. Entombment will take place in All Saints Mausoleum, North Haven. Friends may also visit with the family on Sunday at the funeral home from 3:00-6:00 pm. Contributions in Grace's memory may be made to St. Rita Church- 1620 Whitney Ave., Hamden, CT 06517.