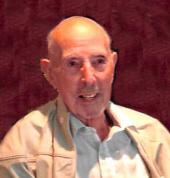 Gregory (Leroy) Dabakis, 91, husband of the late Stella Cokotis Dabakis, passed away peacefully at his home in Hamden on September 17, 2015. Born in Bridgeton, NJ on December 1, 1923, he was a son of the late Mary and John Dabakis. He will be greatly missed by his surviving child Betsy D. (Edward) Gorecki. He was a loving father to Betsy and the late John T. (Cathy) Dabakis. Also survived by five adoring grandchildren; Melissa (Erik) Lundquist, Emily Gorecki, Jessica (Steve) Kubicki, Melanie Dabakis, and Tracy Dabakis, his sister, Helen Stavarakis of MA, and many nieces and nephews. He is predeceased by his sisters, Evelyn Dabakis and Poppy Loukakes, and brothers, Charles, George and James Dabakis. Gregory worked as a federal postal employee until his retirement, and was a member of the National Active & Retired Federal Employees Association. He was an active member of St. Barbara's Greek Orthodox Church in Orange and of AHEPA. He was a proud US Veteran, having served in the Coast Guard. He always enjoyed traveling, listening to opera music, shopping at flea markets, and his collection of rare books, but cherished his loving wife Stella and family above all else. Calling hours for Gregory will be from 4-7 pm on Monday, September 21 in BEECHER & BENNETT FUNERAL HOME, 2300 Whitney Ave., Hamden. Friends are invited to attend his funeral service on Tuesday, September 22 at 10 am at St. Barbara's Greek Orthodox Church, 480 Racebrook Rd., Orange. Burial will follow in Beaverdale Memorial Park. In lieu of flowers, contributions in Gregory's name can be made to St. Barbara's Greek Orthodox, 480 Racebrook Rd., Orange, CT 06477.