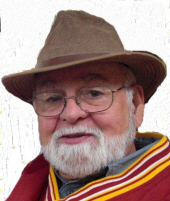 Gus D. Lawrence, age 76 of Hudson, FL passed on to our Lord on Sept. 26, 2012. Gus is survived by his wife Jean of 46 years, his niece Debbie Betley, a nephew Robert Lee Lawrence, a host of grand and great grand nieces and nephews, his brother-in-law Douglas Bre Veglieri and sister-in-law Marion Lawrence. Born on June 16, 1936 in Wellsburg, WV to Hannah and Gus Lawrence, Gus moved to Bridgeport at age 13 where he spent his high school years and 38 years with the United Illuminating Co. until his retirement. After spending two years in the Army, Gus became heavily involved in softball and bowling, but in 1982 he joined the Masonic Fraternity in West Haven, CT. He was a passionate member of Annawon Lodge # 115, progressing through the chairs to become Worshipful Master in 1989. He then went on to serve as Associate Grand Marshall, then District Deputy for the 4th Masonic District in CT in the 1990's. Gus had many interests including jazz, the law, Mark Twain, the Civil War, the history of our Country and learning the banjo. He also loved Golf, so after ten years of retirement in CT, he and his wife Jean moved to Hudson, FL in 2004, where he became active in his new community of Beacon Point, serving on the Board of Directors, volunteering with the Pasco Sheriff's Office, including fostering child safety as McGruff, The Crime Dog and pursuing and honing his golf game. A gentleman with many talents he will be greatly missed by those who knew, loved and respected him. Please join the family on Saturday, October 27th to honor his memory and celebrate his life at BEECHER AND BENNETT – TAYLOR FUNERAL HOME, 410 Campbell Ave, West Haven. Visit with his family from 2-3 PM with a Masonic Service at 3P.M. followed by a memorial service. A reception will follow at Annawon Lodge after the service. In lieu of flowers, a donation may be sent to the Masonic Charity Foundation, P.O. Box 70, Wallingford, CT 06492.