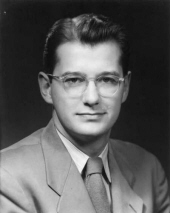 H. Thomas Robinson, MD, 93, formerly of North Haven, beloved husband of June McNutt Robinson for 66 years, died at home at Evergreen Woods, 88 Notch Hill Road in North Branford, CT on February 22, 2013. He was born in Cumberland, Maryland, on January 3, 1920, son of the late Dr. Howard T. Robinson and Ann Gallagher Robinson. During World War II he was in the US Army Medical Administrative Reserve and was on active duty in the USAF during the Korean War. He received both his BA and MD degrees from Johns Hopkins University, which he was very proud to have attended. He then trained in pediatrics at the University of Michigan and again at Johns Hopkins after which he practiced for 22 years. In 1970 his family moved to North Haven from Warren, Ohio. He then completed training as a Radiation Oncologist, practicing at Yale-New Haven Hospital and New Britain General Hospital. After retiring, he worked locum tenens at facilities around the country until 2002. Tom was a very special physician, nicknamed Marcus Welby because of the loving way he touched all his patients. He especially loved his family, enjoyed a large circle of friends and numerous hobbies, including bridge, tennis and golf. He had a lifetime passion for sports, particularly baseball and basketball, of which he had an amazing memory of all the statistics relating to players and events. His glorious stories will be cherished forever. In addition to his wife, he is survived by his sons, David (JoeAnn) of Meriden, Tom (Annette) of Westford, MA, daughters Ann (Joan) of Winona, MN, Susan of Auburn, ME, and Lynn (Jim) Bauer of Minot, ME. Eight grandchildren and ten great-grandchildren complete his family. He was predeceased by his brother, William. Honoring Tom's wishes, interment will be private and at the convenience of the family. Memorial contributions in Tom's memory may be sent to American Red Cross or The Connecticut Food Bank.