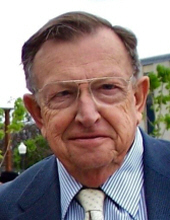 Harold F. Neun, 92, of Wallingford, passed away peacefully on July 1, 2019 with his family by his side. He was the beloved husband of the late Lore (Kolb) Neun for 66 years. Harold was born in Meriden on July 28, 1926, son of the late Herman and Frieda (Hass) Neun. He grew up in Meriden before attending Bentley College, where he graduated with a Bachelor's Degree in Accounting and Finance. Harold raised his family in Middlefield and for many years owned and operated the East Side Market in Meriden before becoming an insurance agent at Rice, Davis, Daley & Krenz in Middletown. He was a lifelong member of St. John Lutheran Church, active on the investment and building committees. Harold is remembered fondly for his love of dinners with his family and all things chocolate, his ability to carry a tune, his sharpness and wit, and his oversized personality, a presence also matched in stature. He will be dearly missed by his family, Karen Wood & George Neyer, Sandra & Stephen Hurd, Michael & Ashley Wood, Brian & Allison Wood, Kevin Wood, Lauren & Kenneth Sheehan, and Leslie & Vincent Oxenham, along with five great-grandchildren. His life was also blessed by his sister Marilyn Hoff, her husband Howard, and their children and families. Also special to Harold were his caregiver Abu Abdallah and aide Heather Mckney. Friends and family are invited Saturday, July 6th at St. John Lutheran Church, 520 Paddock Avenue in Meriden. Visitation will be at 10 am with the funeral service beginning at 11 am. Burial will follow in Gethsemane Cemetery, Meriden. In lieu of flowers, memorial donations may be made to St. John Lutheran Church, or to a church of one's choice.