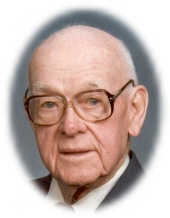 In New Haven, Sunday, January 7, 2007, Harold Joshua Eliason, 97, of North Haven. Harold was the husband of the late Shirley Tourjee Eliason. He is survived by a daughter, Susan Eliason Traudt and her husband Eric of North Haven; grandsons Kristian Maiorino, Daniel Maiorino & his fiancee, Nicole Maccione, Joshua Maiorino & Martin Traudt, and brothers, Clarence & Alton Eliason. In addition to his wife, Harold was predeceased by a sister, Elizabeth Walker and brothers, Edwin, George, Raymond and Chester Eliason. A son of the late George and Bertha Anderson Eliason, Harold was born in New Haven on August 8, 1909. He graduated from Hillhouse High School in 1928. He was in the Naval Reserves from 1928 to 1941 when he was called to active duty. Harold served as a Chief Machinist Mate (rank CPO, later Warrant Officer) in the US Navy on the USS Solace & later the USS Zeus during WW II. He was a Pearl Harbor survivor. Harold worked as an air conditioning & refrigeration mechanic for Westville Electric until his retirement in 1975. He was a member of the North Haven Congregational Church, Past Master of Corinthian Lodge # 103, a member of the Eastern Star, Golden Rod # 34, OES, American Legion Post 88, and the Pearl Harbor Survivors Association. Funeral service Thursday, Jan. 11, 2007 at 11 a.m. at BEECHER & BENNETT, 2300 Whitney Ave., Hamden. Friends may call one hour prior to the service from 10 - 11 a.m. Memorial Contributions may be made to the Masonic Charity Foundation, P.O. Box 70, Wallingford, CT 06492.