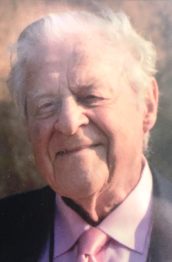 Harold Obstler passed away on Thursday, April 22, 2021 at the age of 95. He did so peacefully on his own terms, with dignity, grace, courage, kindness, and as always, humor, in the company of the family he loved so much. Harold’s was a life well lived. We will miss him.
Harold was born and raised in New York City. He graduated from Columbia University, served in WWII, and after leaving the service, travelled and studied in post-war Europe, where he had a chance encounter with Tennessee Williams. Upon his return to the United States, Harold attended Yale Law School, where he met and fell in love with Mimi Obstler, his wife and best friend for 62 years.
In 1954, Harold moved back to New York with Mimi, where they raised a family and had many wonderful times with an incredible and eclectic village of lifelong friends on Manhattan’s Upper West Side. An original 1962 member of Mets Nation, he donned the blue and orange and shared LGM! times with his family and friends for all 59 years.
In 1989, after practicing law for 37 years, including a long tenure as the General Counsel of the Colgate Palmolive Company, Harold retired with Mimi to Old Lyme to pursue other interests, including his unrelenting passion for writing. In 2016, after Mimi passed, Harold dedicated himself to reading every published novel and short story by Henry James. In Mimi’s honor, he then wrote and published a beautiful essay, “Living and Dying with Henry James.”
Harold is survived by his two sons; Peter and Andrew, his daughters-in-law; Ellen and Samantha, his five grandchildren; Dylan, Dara, Aidan, Oliver, and Sydney Bell, his grandsons-in-law; Mike and Pete, and his two great-grandchildren; Micah and Ocean.
To all of you who touched or were touched by Harold, we thank you and you will forever remain in our hearts and memories of him. A memorial service in Harold’s honor will be scheduled for family and friends later this summer. Arrangements are in care of Beecher & Bennett Funeral Home, 2300 Whitney Avenue, Hamden.