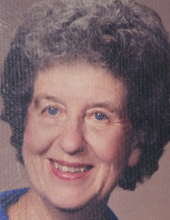 Harriet Ljunggren, 92, of North Branford, wife of the late Sven 'Swede' Ljunggren for 60 years, passed away December 23, 2019. She was born in Hartford, CT, a daughter of the late Arthur and Anna Johanson Olson. After graduating from Commercial High School in New Haven, she worked for the New York, New Haven, and Hartford Railroad. Once her children were grown, Harriet re-entered the workforce, first in the North Branford school system, and later as an Administrative Assistant at Community Banking Co. She was a longtime member of Bethesda Lutheran Church, the Bethesda Doubles Club, and the Vasa Order of America in New Haven. Harriet was the mother of Paul W. Ljunggren and his wife Barbara of North Haven, the late Sue Ann Clarke and her husband J. Thomas Clarke of Greenville, SC, and grandmother of Christian (Rachael) Ljunggren, Jillian Ljunggren, Wendy (Andrew) Pfrenger, Daniel (Michele) Clarke, and Katherine Clarke. She is also survived by 7 great-grandchildren. She was predeceased by a sister, Doris Hentz and a brother, Eric Olson. A Memorial Service will be held on Saturday, February 1 at 11 a.m. at Bethesda Lutheran Church, 305 Saint Ronan St., New Haven. Burial will be private. BEECHER & BENNETT, 2300 Whitney Ave., Hamden in care of arrangements. In lieu of flowers, contributions in Harriet's memory may be sent to Bethesda Lutheran Church, 305 Saint Ronan St., New Haven, CT 06511.