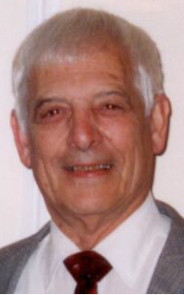 Harry A. Richetelle, Jr., 92, a lifelong Hamden resident, passed away February 13, 2022. Born in New Haven on November 23, 1929, he was the son of the late Harry A. Sr. & Doris (Smith) Richetelle. He is survived by his loving wife of 67 years, Elaine (Schenk) Richetelle, his children; Lori Richetelle Pizzi (Robert), Carl Richetelle (Richard DiGirolamo), and Glenn Richetelle (Deb), grandchildren; Nicole and Michael Pizzi and Kyle (Erin) and Jodie Richetelle, a great-granddaughter; Sophia Richetelle, and several nieces & nephews. He was predeceased by his sister, Elizabeth Green.
Harry was a U.S. Army Veteran, stationed in Japan during the Korean War from 1951-1953. He married Elaine in 1954, and a long successful career as a salesman would follow, working for Brock Hall Dairy, Cott Beverages, and United Electrical Supply. Harry retired from Quinnipiac University in 2003. At the age of 16 he joined the Mix District Volunteer Fire Company, and later earned the rank of Lieutenant. He held the offices of Treasurer, Vice President, and President, a role he filled for 12 years. Harry became a member of the Hamden Elks Club #2224 in 1971, rising through the official chairs until becoming Exalted Ruler. He remained involved for as long as he was able, serving as the Elks Permittee and Chairman of the House Committee. A skilled duckpin bowler, Harry belonged to the International League for over 51 years. He was extremely supportive of his children and grandchildren’s activities, coaching for the Hamden Fathers Baseball Association for 13 years, Hamden Youth Hockey for 6 years, and assisting with the Junior & Senior Girls Softball League. A longtime active member of Christ Lutheran Church, Harry would volunteer every week during the service. He was also an avid fan of the New York Yankees and Rangers, and enjoyed watching NASCAR.
Friends are invited to visit with Harry’s family on Wednesday, February 16th from 5:00-8:00 p.m. at Beecher & Bennett Funeral Home, 2300 Whitney Avenue, Hamden, and may attend his Funeral Service on Thursday at 10:00 a.m. in the funeral home. Burial with Military Honors will follow in Hamden Plains Cemetery.