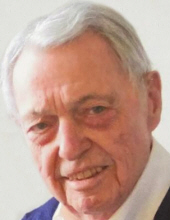 Harry Baker Adams died on January 22, 2020. He was the husband of the late Manette Fishwick Adams, and is survived by their three children, Lynne Adams of New York City, Susan Adams (Kent Mason) of Bethesda, Maryland, and Paul Adams (Susan) of Piedmont, California; five grandchildren, Zachary, Katie, & Sam Mason, and Jack & Zoe Adams; his brother, John Adams of Salem, Massachusetts. He was born in 1924 in Stamford, Kentucky, a son of the late Hampton and Adelaide Brettschneider Adams. He grew up in Frankfort, Kentucky, and moved to Saint Louis, Missouri just before entering high school. After graduating from Soldan High School in Saint Louis in 1942, Harry began his freshman year at Yale University. After freshman year he joined the Army Air Corps and served three years as a pilot. Following his honorable discharge he returned to Yale and completed his undergraduate and divinity degrees. After serving as pastor of churches in Missouri and Illinois, Harry joined the faculty of the Yale Divinity School in 1956, where he began a long and distinguished career of service to Yale and the greater community. Harry served in numerous capacities at Yale, including Associate Dean of the Divinity School and Horace Bushnell Professor of Christian Nurture. In 1986, he was appointed as Chaplain of Yale University and in 1987, as Master of Trumbull College. Following those assignments, he served as acting Dean of the Institute of Sacred Music and acting Master of Saybrook College. In addition to his service to Yale, Harry was also pastor of the Dingletown Community Church in Greenwich for many years. In his retirement, Harry continued to be active in the Yale community, attending events at Trumbull College, the Elizabethan Club and the Koerner Center of Emeritus Faculty. He was also a frequent volunteer at the Connecticut Food Bank. A Memorial Service will be held at Marquand Chapel at Yale Divinity School, 409 Prospect Street, New Haven, on February 8th at 2:00 p.m. BEECHER & BENNETT, 2300 Whitney Ave, Hamden in care of arrangements. In lieu of flowers, the family requests that any donations in Harry's memory be sent to the Connecticut Food Bank, 2 Research Parkway, Wallingford, CT 06492 or www.ctfoodbank.org.