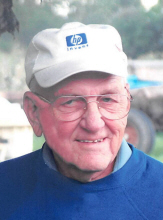 Harvey F. Lockyer, age 89, of Woodbridge, passed away peacefully, surrounded by his family at Yale New Haven Hospital on October 15, 2015. Harvey was born in New Haven on April 20, 1926, a son of the late Harvey J. Lockyer & Franciska Hoffman Lockyer. Harvey is survived by his loving wife Edith L. 'Edee' Dahlin Lockyer; his sons, Douglas Lockyer of Middlebury & Donald Lockyer of Canton; his grandchildren Brynn, Carly, & Timothy Lockyer & Nicole Lockyer and his great grandson Brandon Young. He was predeceased by his sisters, Elisabeth Thompson & Marjorie Tucker and his brothers, Robert & Clifford Lockyer. Harvey was a resident of Woodbridge since the age of two; he attended Hillhouse High School in New Haven, leaving in his junior year to join the US Navy during WWII. He hence traveled to Europe on the Queen Mary and served on a LST in the invasion of Normandy with the British on Gold Beach. After the war, he went back to school and graduated from Hillhouse before embarking on a long career in services and telecommunications. Harvey was a former lineman for the UI Company in New Haven for 6 years prior to his 31 years and retirement from the Southern New England Telephone Co. where he worked as an installer and repairman. He was a former Boy Scout Troop Leader, a coach of softball and baseball in the Bethany & Woodbridge leagues, a member of the New Haven Elks #25, a charter member of Lt. G. Bronson Bedworth Post #2871 of the VFW, the Telephone Pioneers at SNET and member of the Woodbridge Grange # 108. Harvey's family would like to express their gratitude to the staff at the Medical ICU at YNHH Smilow Center for the care, comfort and support they and Harvey received in his last days. Friends may visit with his family on Sunday, Oct. 18th from 4:00 to 7:00 PM at BEECHER & BENNETT FUNERAL HOME, 2300 Whitney Ave, Hamden and may attend his Funeral Service on Monday at 10:00 AM at the First Church of Christ, 5 Meetinghouse Rd, Woodbridge. Burial with Military Honors will follow in Milfordside Cemetery, Woodbridge. In lieu of flowers contributions in his memory may be made to the American Heart Association, 5 Brookside Dr., Wallingford, CT 06492.