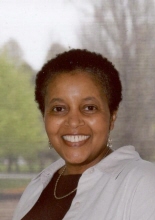 Hattie Lorraine Spence, 58, beloved wife of 36 years to Arthur Spence, of Niantic, passed away at Lawrence and Memorial Hospital on January 6, 2010 after a courageous battle with cancer. She was born in Snow Hill, NC on August 18, 1951 to the late Owen and Hattie Whitfield Taylor. Besides her husband, Hattie leaves her daughters, Leslie Spence of Niantic, Tracey Conyers and her husband David of Grayson, GA, Kristal Spence of Waterford; son, Arthur Allen Spence II of Waterford; grandson, Ryan Conyers of Grayson, GA; brothers, Owen Taylor and wife Juanita, Lewis Taylor, both of New Haven; sister, Tessie Williams of Washington, DC. Hattie grew up in North Carolina before moving to New Haven in 1964. After living in New Haven for several years, Hattie and Arthur moved to Waterford in 1991 to raise their family. She worked for Southern New England Telephone Company as a District Manager from 1973 to 1991. An active member of Tree of Life Christian Fellowship she also taught at their Coastline Christian Academy . Hattie also owned a business for the last 24 years, Cedars of Lebanon, which was a Christian outreach program for youth and adults. She produced and directed numerous Christian Theatrical Productions. For the last 5 years she has been a Para Professional at Clark Lane Middle School in Waterford . She enjoyed a good crossword puzzle, game of scrabble, and reading. Hattie was an avid believer in the Christian Faith, mother to all, and a caring and angelic soul. A Funeral Service will be held at BEECHER & BENNETT, 2300 Whitney Ave., Hamden, on Wednesday, January 13th at 10:00 a.m. followed by a burial at Beaverdale Memorial Park. Friends may visit at the funeral home, on Tuesday evening from 5 to 8:00 p.m. In lieu of flowers, contributions in Hattie's memory may be sent to the American Cancer Society, 538 Preston Ave., Meriden, CT 06450.