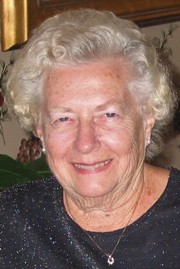 Helen King, 99, wife of the late Jay King, passed away unexpectedly and peacefully on June 2, 2022 at Hartford Hospital surrounded by her family. Helen was born at the Brown Family farmhouse in Turkey River, Iowa on November 26, 1922, the middle daughter of the late Arthur and Pearl Troester Brown. She graduated from Guttenberg High School in 1939 and from Iowa State Teachers College in 1941. After a brief stint as a teacher, she left Iowa for a clerical job in Hawaii. When her job assignment in Hawaii ended, she traveled to Japan, where she was employed by the U.S. Government at an Army Service Club in Tokyo. It was there in Tokyo that she met and married SFC Jay King in June of 1951. After their return to the U.S. and his discharge from the Army, Jay and Helen moved to Broomall, PA, where they welcomed their first daughter, Katherine. Jay’s first career as an American Saddlebred horse trainer took them from Pennsylvania to New Jersey and then finally to Connecticut, where they eventually settled in Meriden and welcomed two more daughters, Karyl and Kimberley. Helen worked briefly as a substitute teacher and then as a salesclerk at Perlin’s Children’s Apparel store in downtown Meriden before gaining employment as a payroll clerk for the Meriden Board of Education, where she worked for twenty-one years. Helen was a longtime member of First Congregational Church in Meriden. In addition to being a loving wife and mother, Helen had a thirst for knowledge and had an active social life. She had a great circle of friends with whom over the years she bowled, golfed, cross-country skied, took Adult Ed courses in Meriden, attended plays at The Hartford Stage, travelogues and performances at The Bushnell, performances by the Castle Craig Players, classes about opera, and various courses at Middlesex Community College. She also enjoyed cheering on the NY Yankees and the UCONN Women’s basketball team. After her retirement, she and her friends would meet to have lunch on Wednesdays, a tradition that continued for twenty-five plus years. After Jay’s retirement, they were fortunate to own a winter home in Lake Worth, FL for seventeen years, a favorite place for the family to visit. They were able to take several cruises, travel to Europe, and play Bingo and cards with their friends weekly. After Helen moved to Governor’s House in Simsbury in January, she participated in Bingo there and continued to watch her favorite programs and solve puzzles nightly. Helen was kind, patient, intelligent, a great listener who remained calm and stoic in demeanor, and an inspiration to her daughters. She always maintained a positive outlook in life, which she credited, in part, to her longevity – that and good genes! We were truly blessed to have Helen in our lives for as long as we did. Until the very end, Helen continued to impress family, friends and caregivers with her excellent memory and her mental sharpness. We were so hoping to celebrate her 100th birthday with her this November. Helen is survived by her daughters; Karyl Rappaport and her husband Harry, Kimberley Kelly and her husband Robert, sister Dorothy Small, grandson Christopher Williams, and son-in-law Bruce Rudolph. She is also survived by several step-grandchildren and great-grandchildren, nieces and nephews. Besides her husband Jay, she was predeceased by her daughter Katherine Rudolph, and her sister Eleanor MacMillan. The family would like to thank Helen’s special caregivers over the last few years – Madeline, Jasmine, Alexis, Juliana, Ruth, and Maria, and also the Emergency Room staff at Hartford Hospital who handled Helen’s care on June 2nd.
A memorial service celebrating Helen’s life will be held on Saturday, September 24, 2022 at 11:00 a.m. at Beecher & Bennett-Flatow Funeral Home, 48 Cook Ave., Meriden. Friends are invited to visit with her family from 9:00-11:00 a.m. before the service. She will be privately laid to rest with her husband Jay at the CT State Veterans’ Cemetery in Middletown. In lieu of flowers, memorial contributions may be made in Helen’s name to the Hospital of Central Connecticut for the Katherine Ann King Rudolph Hereditary Cancer Genetics Fund and mailed to: Development Office, The Hospital of Central Connecticut, 100 Grand Street, New Britain, CT 06050.