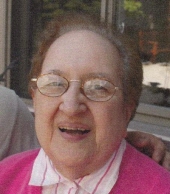 Helen Russo Proto, age 86, passed away on December 10, 2012 in Southington. Formerly of Hamden, Helen was the widow of Andrew Proto. Born in New Haven on March 13, 1926 she was the daughter of the late John and Marian 'M' Juliano Russo. Helen is survived by her sons, John Proto & his life partner Michael Gambino and David Proto & his life partner Stephen Szymanski all of Hamden. Helen was a medical secretary for Dr. David Clement and later the Hospital Of Saint Raphael before retiring in 1992. She was past president of the Hamden Women's Club and former member of the Blessed Sacrament Church Ladies League. Her funeral will be from BEECHER & BENNETT FUNERAL HOME, 2300 Whitney Ave., Hamden on Wednesday December 12th at 9:30 AM, followed by her Mass of Christian Burial at 10:30 AM in the Church of the Blessed Sacrament. Interment in All Saints Cemetery. Friends may also visit with her family at the funeral home on Tuesday from 6:00 to 8:00 PM. In lieu of flowers memorial contributions may be made to the Alzheimer's Resource Center, Residents Arts & Music Program, 1261 South Main Street, Plantsville, CT 06479.