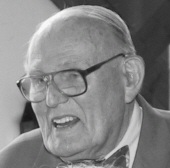 Henry Forster Miller, 92, of Orange, husband of sixty-six years to Maria Bullitt Miller, passed away early on the morning of October 14, 2008, at Yale-New Haven Hospital. He was born in Nonquitt, MA, on the 16th of September, 1916, to the late Rutger and Dorothy Forster Miller. He was preceded in death by his brother, Rutger Bleeker Miller, Jr. Mr. Miller attended Allen Stevenson School and Milton Academy, and graduated from Yale University in 1938. He returned to obtain his Master's in Architecture in 1948. He was a Fellow of Davenport College and a member of Mory's. Henry married Maria Stockton Bullitt of Philadelphia in 1942. As a commissioned officer he obtained the rank of Major in the Army's 28th Division. He vividly recalled being in the first brigade to march through Paris after its liberation. He fought in the Battle of the Bulge and was decorated for his service in France, Belgium, Luxembourg and Germany. He served in the Army Reserve after the war. Designed by Henry in fulfillment of his Master's degree, he and Maria constructed a home in Orange, where they have resided for the past sixty years. The house drew considerable attention, including a feature section in the New Haven Register. It has been placed on the National Register of Historic Places as a prime example of the Modern or International style, and employs passive solar-heating. As a partner in Davis, Cochran & Miller, he designed many schools and public buildings, including the University of New Haven and St. Augustine's Church in North Branford. He was a member of the American Institute of Architects. He went on to work for Yale University as Assistant Director of Facilities Planning, where one of his responsibilities was overseeing the installation of disabled access in University buildings. He served as president of the Connecticut Trust for Historic Preservation, was on the board of the New Haven Historical Society, and was a member of the New Haven Preservation Trust and the Kiwanis Club. In recent years Mr. Miller was responsible for the establishment of a war memorial at the High Plains Community Center in Orange, which honors veterans of all wars. He volunteered at the Community Soup Kitchen where he served as the writer of their quarterly newsletter, 'The Ladle'. Throughout his life he spent summer months at Nonquitt, MA, on the shores of Buzzard's Bay, where he enjoyed painting watercolors. In addition to his wife, Henry is survived by his sister Susan Jackson of Brookline and Nonquitt, MA, and his five children: daughter Maria Miller and her husband Kailash Bahadur of Toronto, Canada; son Andrew Miller and his wife Elizabeth of Norman, OK; daughter Dorothy Heard and her husband William of Rockville, MD; son Steven Miller and Jeannine Scheinhorn of La Canada, CA; and son Henry Miller, Jr. of Hamden, CT. Mr. Miller has seven grandchildren: Jay and Jared Bahadur, Evan and Faye Miller, William IV and Emily Heard, and Jessica Hall of Washington, D.C. Relatives and friends are invited to attend a Mass of Christian Burial on Tuesday, October 21st at 11:00am at Holy Infant Church, 450 Racebrook Road, Orange. BEECHER & BENNETT, 2300 WHITNEY AVE., HAMDEN in care of arrangements. Memorial contributions in Henry's name may be sent to the Community Soup Kitchen, 84 Broadway, New Haven, CT 06511.