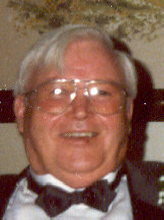 Henry Francis Gilmore, age 85, of Grandview Ave. Hamden, passed away suddenly June 12, 2009. Henry was predeceased by his wife Barbara Wehner Gilmore. He is the father of Patricia 'Burke' Gilmore and Henry 'Happy' and his wife Lizz Gilmore all of Hamden, grandfather of Gary Burke of Colorado and brother of the late Edward J. Gilmore. Born in New Haven on August 20, 1923 he was a son of the late Edward P. and Rosemary 'Mae' Monahan Gilmore. Henry was retired from the United Ulluminiating Co. in New Haven, where his was employed over 30 years. After his retirement he worked many years at the Meadow Brook Golf Course in Hamden. He was a WWII Army Veteran, a member of the American Legion Post # 88, a Fourth Degree John Barry member of the Hamden Knights of Columbus, a member of New Haven Irish American Club and the Anchor Club. Funeral from BEECHER & BENNETT, 2300 Whitney Ave., Hamden on Monday June 15, 2009 at 10:30 AM followed by a Mass of Christian Burial at 11 AM in Blessed Sacrement Church, Hamden. Friends may also visit with his family on Monday from 9 to 10:30 AM. Interment with Military Honors will take place in St. Mary's Cemetery, Hamden. In lieu of flowers contributions in Henry's & his loving wife Barbara's memory may be made to; Partnerships Center for Adult Day Care, 3 Industrial Circle, Hamden, CT 06514.