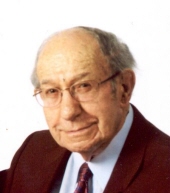 Henry L. Sherwood, 92, of Orange, passed away in New Haven on May 31, 2010. Husband of the late Evelyn Crowley Sherwood, Henry is survived by sons Henry L. Sherwood II of Allentown, PA and Charles W. Sherwood and daughter Judith A. and husband John Mitchell, all of Orange; grandchildren Scott, Stephanie and Kimberly Sherwood, and Robert, Erin and Ryan Mitchell; great grandchildren Kristina and Stephen Sherwood and Madison Mitchell; sisters Susan Mlinar of Easton and Mabel Wickson of Monroe and brother Jesse Sherwood of Bombay, NY. In addition to his wife, Henry was predeceased by 4 brothers and 3 sisters. A son of the late William G. and Caroline M. Metcals Sherwood, Henry was born in Fairfield on December 27, 1917. He was a Navy Veteran, having served during WW II, and retired from UI in 1994 after having been employed there as a supervisor for 53 years. Henry had been a member of the Church of the Good Shepherd since 1957 and was a charter member of Orange Lodge #143 A.F. & A. M. for 57 years. Funeral Service Friday, June 4, 2010 at 11:00 AM at the Church of the Good Shepherd in Orange. Masonic Service by Orange Lodge #143 A.F. & A. M. at 9:00 AM at BEECHER & BENNETT-TAYLOR FUNERAL HOME, 410 Campbell Ave., West Haven. Friends may visit with the family at the funeral home from 8:30 - 10:30 AM prior to the funeral service. Memorial Contributions in Henry's memory may be made to the Church of the Good Shepherd, 680 Racebrook Rd., Orange, CT 06477 or to Orange Lodge #143 A.F. & A. M., c/o Ronald Goldwyn, 46 Elder St., Milford, CT 06460.