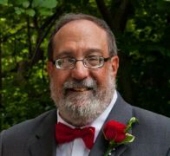 Henry William Farkas passed away from a heart attack in his home in Morris Cove on November 23, 2016 at age 59. Through his last moments he enjoyed the loving company of his longtime partner Renate Dicks. He is survived by his daughter Jen Farkas and son Daniel Farkas, as well as his grandson Christopher Eldred. Born on April 29, 1957, Henry grew up in Levittown, PA. He lived life to the fullest as a proud Eagle Scout, Freemason, and an active member of several local organizations, including Branford Folk Music Society, New Haven Country Dancers, and the New Haven Yacht Club. Henry was an avid ham radio enthusiast who was generous with his skills in times of need, including relaying messages in New York when the Twin Towers fell on 9/11. His professional accomplishments were always a source of pride, including his current responsibilities as a Senior Unix Administrator at UnitedHealth Group. His past employers included AT&T, IBM, University of New Haven (where he also received his Bachelor's Degree), and New Haven Computer Company. Friends may visit with Henry's family on Saturday, December 3rd from 10 AM-12 PM at BEECHER & BENNETT, 2300 Whitney Ave., Hamden. A Masonic Service will be held during this time at 11 AM. In lieu of flowers, Henry would have appreciated your support to any of the local organizations of which he was a member; including Columbus House (586 Ella T. Grasso Blvd., New Haven, CT 06519), Branford Folk Music Society (P.O. Box #441, Branford, CT 06405), Hiram Lodge #1 (285 Whitney Ave., New Haven, CT 06511), New Haven Country Dancers (1680 Ridge Rd., North Haven, CT 06473), and New Haven Yacht Club (156 Cove St., New Haven, CT 06530).