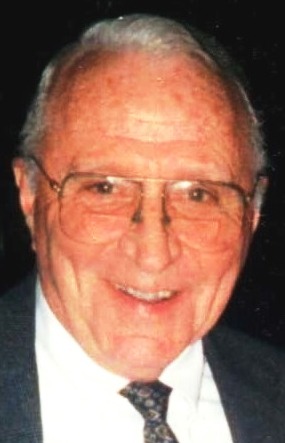 Henry W. O’Brien, age 91, of Hamden, passed away peacefully on July 29, 2020 surrounded by family. Henry was the beloved husband of Nancy Haegel O’Brien for 64 years. He was born on Feb. 7, 1929 to the late Katherine Walpole and Henry W. O’Brien.
Hank was a graduate of Hillhouse High School, University of Connecticut and University of Connecticut Law School. He served in the U.S. Army during the Korean War. During his 40-year career as a trial lawyer he tried more than 100 cases to verdict, an exceptionally rare feat for any trial lawyer. In addition to his stellar career as a trial lawyer, he was also in constant demand as an arbitrator and mediator among members of the bar. His services in this area of the law were highly sought after because of his considerable knowledge of the law, but even more so due to his reputation for fairness, patience, compassion and humility which he had built over many years of practice.
He was also a member of two of the most preeminent trial lawyer organizations in the United States as a Fellow of the American College of Trial Lawyers and an Advocate of the American Board of Trial Advocates. Both organizations are by invitation only and require a legal career marked by the highest standards of ethical conduct, professionalism, civility and collegiality. However, what he will be most remembered for and what he was most proud of, was the admiration and respect he earned not only from his fellow defense trial lawyers, but from his adversaries on the plaintiff’s side of the bar. Without exception, all sang his praises as a consummate professional who dealt fairly, honestly and in good faith with his opponents, whether a grizzled veteran or a new member of the bar, while simultaneously representing his clients with extraordinary skill and expertise. He will also be remembered for the many young lawyers he took time to mentor and assist at every opportunity, as others had done for him early in his legal career. He never forgot where he came from and giving back to the profession he loved was one of his greatest pleasures. He spent his legal career with the law firms of Greenberg and Hurwitz and Cotter, Cotter and Sohon, while also practicing as the Assistant Town Attorney for Hamden for several years. Upon retiring from Cotter, Cotter and Sohon, he opened his own law practice in New Haven.
Hank had a lifelong love of sports. He was captain of his high school tennis team and played varsity tennis in college. He was also a staunch supporter of his beloved UConn Huskies basketball team as well as a devoted fan of his favorite New York sports teams, including the Giants, Mets, and the Knickerbockers. He had been a member of the Wilsonian Club, the High Lane Club, the New Haven Country Club and the Quechee Club of Vermont.
In addition to his wife, he is survived by his four children, Anne O’Brien of West Hartford, Attorney Gregory O’Brien (Kelly Prindiville) of Fairfield, Pamela Riley (Attorney John Riley) of Hamden and Daniel O’Brien (Dawn Acquarulo) of Guilford. His favorite moniker was not “Attorney,” but “Grandpa,” and he leaves behind his seven cherished grandchildren; Tess, Oliva, and Hope Riley, Dylan, Bridget Rose, Connor, and Grace O’Brien. Hank was predeceased by his sisters Catherine Morrow and Mary Vaughn, his brothers-in-law Dr. James Morrow, Joseph Vaughn, Dr. Edward Haegel and sister-in-law Eleanor Haegel. He also leaves behind many beloved nieces and nephews.
A Mass of Christian Burial will be held on Saturday, August 1st at 10:30 a.m. at Divine Mercy Parish-St. Rita Church, 1620 Whitney Avenue, Hamden. A private burial will follow. In lieu of flowers, contributions can be made to St. Jude Children’s Hospital, 501 St. Jude Place, Memphis, TN 38105, Connecticut Hospice, 100 Double Beach Rd., Branford, CT 06405, or Shriners Hospitals for Children, P.O. Box 863765, Orlando, FL 32886. Arrangements are in care of Beecher & Bennett Funeral Home, 2300 Whitney Ave., Hamden.