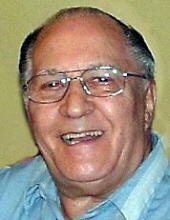 Herbert D. Dandelski, age 89, of Wallingford, passed away on May 9, 2018. Born in Meriden on November 6, 1928, son of the late Emil and Marion (Lucas) Dandelski. Herb was a resident of Meriden most of his life. He was predeceased by his wife Dolores (Abele) Dandelski, his brothers Emil, Irving & Robert Dandelski, and a great-grandson. Herb is survived by his fiancee Lois Polmanteer of Meriden; daughters, Pamela (Dandelski) Bundock & her husband James of Lampe, MO and Christine (Dandelski) Cardona & her husband Jose of Meriden; sons David Dandelski & his wife Laurie of Bristol, Robert Dandelski & his wife Terri of Manchester and Donald Herbert Dandelski of Meriden; sisters Sally Sioch of Meriden and Barbara Dorsey of Florida. Herb also leaves 15 grandchildren and 21 great-grandchildren, and a host of extended family members. He was a US Army Veteran, serving in the 11th Airborne Division. He retired from Allegheny Ludlum Corp. where he was a machinist for many years; prior to that he was employed at Pratt & Whitney Aircraft. Herb was a quiet man at heart who loved to play pool with his brother and grandchildren. His family would like to thank Masonicare Ramage 4 for the care and compassion he received while in their care over the last few years. Herb always enjoyed participating in all the activities at Masonicare. Friends may visit with his family on Monday, May 14th from 10:00 AM to 12:00 PM at Beecher & Bennett - Flatow Funeral Home, 48 Cook Ave., Meriden prior to his Prayer Service, which will begin at 12:00 PM in the funeral home. Burial with Military Honors will follow at Sacred Heart Cemetery, Meriden. In lieu of flowers contributions in his memory may be made to Disabled American Veterans at www.dav.org.