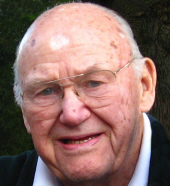 Herbert Eugene Anderson (Herb), 94, of Cheshire, and a longtime resident of Hamden, passed away of natural causes while surrounded by family at Elim Park on March 13, 2016. Married to Janice R. Jervis on June 14th, 1943 (72 years), father of Sheryl A. Maltagliati (Frank) of Hamden and predeceased by H. Bradford Anderson (Patricia) of Madison. Grandfather to Jeffrey Maltagliati, of Chester, Erin Anderson (Michael Johnson), of Whitefield, Maine and Kimberly Day Anderson, of Madison, and great- grandfather to Kaylee-Rose Cappello, Amara and Anya Johnderson. Born on October 12th, 1921 to parents Charles and Ester Anderson in New Haven, and predeceased by his siblings Oscar, Paul, Eleanor Rivoir, Dorothy Marshall, and Walter. He is survived by sister-in-law Helen Anderson, brothers-in-law John DeGray and Bob McGrath (Maureen), along with many nieces and nephews. He graduated from West Haven High School in 1941 then volunteered for the US Naval Air Force, serving on USS Lexington, and was honorably discharged in October 1945. Employed by Underwood Corporation which later became Olivetti, he retired as National Accounts Representative after more than 40 years. He belonged to New Haven JC's for six years, the New Haven Lions Club for 62 years, serving as President three times, and was an active member of the Hamden Promenaders square dance club, as well as the Bethany Bowling League. Herb loved sports, played high school football, ushered at the Yale Bowl for many years, and later enjoyed watching his grandchildren play soccer. An avid sailor, Herb enjoyed time on the water, as well as at the family cottages on Leetes Island in Guilford digging for clams and playing cards. Gregarious, kind, and good-humored, he easily made friends. Friends are invited to visit with his family from 10:30 AM-12:30 PM Thursday, March 17 at BEECHER & BENNETT FUNERAL HOME, 2300 Whitney Ave., Hamden. His Funeral Service will begin at 12:30 in the funeral home. Burial will be held in Beaverdale Memorial Park at a later date. In lieu of flowers, donations can be sent to the New Haven Lions Club, P.O. Box 8012, New Haven, CT 06530.