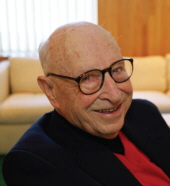 Pearce, Herbert Henry 1916-2011 Herbert H. Pearce of New Haven passed away Monday, April 18th, three days shy of his 95th birthday. He was born in New York City to the late Herbert and Anna Pearce, and lived in the North Haven or New Haven from 1917 on. He attended Commercial High School , and went to work at the A.C. Gilbert Company in 1935. He worked his way up the corporate ladder, becoming factory superintendent during World War II, and at 27 oversaw a workforce of 2000 people. He was Sales Manager when he left to start his own business. H. Pearce Company Realtors was founded in 1958, and he remained actively involved until his death. During the course of his career, he served on many local non-profit boards, including the Greater New Haven Chamber of Commerce (Chair), University of New Haven (Vice Chair), United Way (Campaign Chair), Connecticut Association of Realtors (President), Connecticut Hospice (Vice Chair), and numerous others. He received honorary degrees from Albertus Magnus College , the University of New Haven , and Quinnipiac University , as well as many, many awards and honors. He was proudest of having created Pearce Family Scholarship Funds at the three institutions named above, and at Yale University School of Nursing, Southern Connecticut State University, the University of Texas Healthcare System , and the Community Foundation for Greater New Haven. He leaves his wife Martha Wood, his daughters Barbara (Norman Fleming) and Diane, his grandchildren Bradley and Hope Fleming and Matthew Sawyer, and two great-grandchildren. He was predeceased by his first wife, Margaret Perry Pearce. Beecher and Bennett in Hamden is in charge of arrangements. A memorial service will be held at 4 PM on Wednesday, April 27, 2011 at Trinity Church on the Green in New Haven . In lieu of flowers, the family requests that donations be made through a check to the Herbert H. Pearce Memorial Fund at Community Foundation for Greater New Haven, 90 Audubon Street , New Haven , CT 06511 , together with instructions for distribution of the donated funds as gifts to the specified charity of one's choice, or to any Pearce Scholarship Fund.