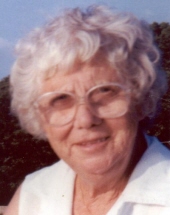 Hertha Edna Benton of Orange, CT and South Fort Meyers, FL passed away peacefully in her home, with her loving family by her side, on August 1, 2009. She was the devoted wife, for 72 years, to Louis Thomas Benton, Jr., and a resident of Orange for 61 years. Mrs. Benton was born in New Haven, CT August 15, 1917, the daughter of the late Hertha J. Nagle Linehan and Edmond J. Linehan. She was proud of being a homemaker and while raising her family, she was very active with school events, working with the Cub Scouts as a Den Mother and also helping with the Orange 4-H Club. She was a lifetime member of the Valley Yacht Club and the Valley Yacht Club Women's Auxiliary of which she gave generously of her time helping to organize many fund raising dinners and events. She enjoyed boating, reading, sewing, crocheting, and above all, her love for Arts & Crafts. In addition to her husband, she is survived by her son, Louis T. Benton, III of FL. Also, her daughters, Hertha Russell of Woodbridge, Gerrie Amendola and her husband Genaro of East Haven, Barbara Thomas and her husband James of Orange, Judith Johnson of Orange and Sandra O'Donnell and her husband Robert of FL, 5 grandsons, 4 granddaughters, 6 great-grandsons and 6 great-granddaughters. She was predeceased by her brother, Edmond A. Linehan, sons-in-law Robert D. Russell and Charles P. Johnson, an infant great-grandson, Michael Farah and Sharon Lynn Russell, beloved wife of grandson, Robert D. Russell, Jr. The Benton family also wishes to express their appreciation to the Orange VNA Staff for their compassionate care and support. Funeral Service, Thursday, August 6, 2009 at 9:00 AM at BEECHER & BENNETT-TAYLOR, 410 Campbell Ave., West Haven. Calling hours at the funeral home are Wednesday from 5:00 to 8:00 PM.