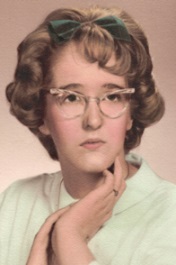 Hope Edna Tuttle died on March 21, 2022 at Masonicare’s Wallingford, Connecticut Campus, where she had resided since February of 2007. Hope was born February 7, 1946, in Ansonia, Connecticut, the daughter of Ernest Lee, II (1914-1991) and Lillian Wilson (1916-1984) Tuttle. In addition to her parents, Hope was predeceased by her sister Sandra (1941-1943); brother Ernest Lee Tuttle, Ill (1944-1945), and grandparents Ernest Lee (1867-1952) and Helen L. Tuttle (1873 -?) and Angus A. (1890-1975) and Lillian L. Williams Wilson (1893-1984). She is survived by dear friends David McAffrey and Judith Gascgone of Ansonia and advocate Barbara Lott.
Hope was educated in the Ansonia school system, graduating June 23, 1965 from Ansonia High School. For many years until her grandmother, Lillian L. Williams Wilson’s death, she was her principal caregiver. Hope was a member of The International Order of Rainbow for Girls, Daughters of the American Revolution Olive Chapter No. 26, Order of Eastern Star of Connecticut, and Eliza A. Macoy Court No. 1, Order of the Amaranth State of Connecticut, where she served as Royal Matron in 1999.
Interment in the family plot at Pine Grove Cemetery, 15 Church Street, Ansonia, will take place Thursday, March 31, 2022, at 9 a.m. followed by calling hours, memorial, Eastern Star and Amaranth services at 10 a.m. at the Masonicare Chapel, 3rd Floor Ramage, 22 Masonic Avenue, Wallingford. Masks are required. Please sign in at the Registration Desk before proceeding to the Chapel. The friends of Hope wish to thank the staff of Masonicare’s Wright Residence, especially Patty Reynolds, staff of the 6th floor Ramage, medical and hospice staff for their care of Hope over the past 14 years as she navigated the ups and downs of her life. In lieu of flowers, donations may be made to the Grand Chapter of Connecticut OES, P.O. Box 143, Plymouth, CT 06782-0143 and designated for the Robert Morris Relief Fund OR to the Grand Court of Connecticut O of A, c/o Eleanor Carbonaro, 548 Lisbon Road, Canterbury, CT 06331-1705 and designated for the Henry P. Wirth Fund. Beecher and Bennett Funeral Home, 2300 Whitney Avenue, Hamden is in charge of the arrangements.