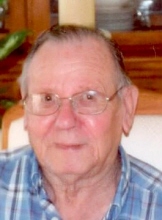 Howard M. Thomas, Sr, 83, of West Haven, an Elder of the Schaghticoke Tribal Nation in Kent, CT passed away on July 1, 2012 at the Connecticut Hospice in Branford. Husband of the late Barbara Bloomer Thomas, he is survived by a daughter Holly C. and her husband David Ciecierski of North Haven and sons Craig W. and Howard Thomas, Jr., both of West Haven. He is also survived by a sister Eleanor Noe of West Haven and a brother Oliver Thomas of Orange; grandchildren Danny and Crystal Thomas and Brittany and Brooke Ciecierski and great-grandchildren Danny and Eboney Thomas and Alyiah Myrick and Evan Royka. In addition to his wife, he was predeceased by sisters Olive Stackpole and Dorothy Clapez and brothers Lester Thomas, Sr, Russell, Robert and George Thomas. A son of the late Oliver G. and Flora Millspaugh Thomas, Howard was born in West Haven on December 16, 1928. He was a US Army Veteran and was a mail handler for the US Postal Service for 30 years, retiring in 1984. He was a member of the Disabled American Veterans of West Haven and a member of the First Congregational Church of West Haven. Friends may visit with the family Thursday, July 5, 2012 from 4-8 PM at BEECHER & BENNETT-TAYLOR FUNERAL HOME, 410 Campbell Ave, West Haven. Funeral service Friday at 10 AM at the funeral home. In lieu of flowers, contributions in Howard's name can be made to CT Hospice, 100 Double Beach Rd, Branford, CT 06405, The American Cancer Society, 38 Richards Ave, Norwalk, CT 06854, or to the Disabled American Veterans of West Haven, DAV Chapter 18, PO Box 26479, West Haven, CT 06516.