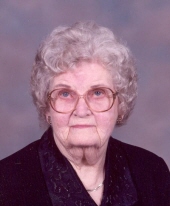 Inez Johnson Nyren, age 92, passed away at her home in New Haven on August 5, 2009. She grew up in Hamden, an only child to the late Joel and Lydia Ahlquist Johnson. After her graduation from Commercial High School in New Haven she worked in retail sales at the Edward Malley Co. until her marriage. Her beloved husband Harold S. Nyren, Sr. predeceased her. She had worked with him in the family business, Nyren Florists, for many years and later at J. A. Long Flower Shop in East Haven. She is survived by her son, Harold S. Nyren, Jr. and daughter, Nancy Nyren Piehler both of New Haven. They would like to thank Hospice Home Care for their compassionate care and support in their mother's final weeks. Inez was a long time member of the Evangelical Covenant Church and later joined her children in attending Trinity Church on the Green in New Haven. A Funeral Service will be held on Monday, August 10th at 11a.m. at Trinity Church, 152 Temple St., followed by a burial in Beaverdale Memorial Park. BEECHER & BENNETT, 2300 Whitney Ave., Hamden is in charge of arrangements.