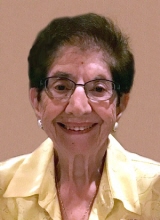 Irene Covras Katechis, 90, of Milford and formerly of Meriden, passed away peacefully, surrounded by her family on Sunday, March 11, 2018 at Yale-New Haven Hospital. She was the beloved wife of the late George D. Katechis for 57 years. Daughter of the late Nicholas and Susanna Michaelides Covras, Irene was born in Lynn, MA on September 30, 1927. She was an active member of St. George Greek Orthodox Church in New Britain for 50 years before moving and becoming a member of St. Barbara Greek Orthodox Church in Orange. Irene was also a lifetime member of the Daughters of Penelope. Throughout her life, she worked as a bookkeeper for several different retail companies. Irene was the embodiment of patience, kindness, class and grace. To know her was to love her. Her smile could brighten anyone’s day and her positive outlook was contagious. Her unshakeable belief in her faith allowed her to win her courageous nine-year battle with pancreatic cancer. Irene’s happiest moments came from spending time in Florida, and creating memories with her family, especially her grandchildren, of whom she was most proud. As the matriarch of her family, Irene was a loving mother, grandmother, sister, and aunt. She is survived by her daughters; Helen and her husband Peter Pappas, and Sue and her husband David Esposito, grandchildren; Daniel Pappas and his wife Amanda, Andrea Pappas, Katie Esposito, and Anthony Esposito, brother-in-law John Stargu, and many nieces, nephews, and cousins. Irene was predeceased by her brother George Covras and his wife Mary; and sister Mary Stargu. Relatives and friends are invited to a Funeral Liturgy on Friday, March 16, 2018 at 10:30 a.m. at St. Barbara Greek Orthodox Church, 480 Racebrook Rd., Orange. Everyone is asked to meet directly at church. Burial will be in Walnut Grove Cemetery, 817 Old Colony Rd., Meriden. Visitation with Irene's family will take place on Thursday, March 15 from 4:00-8:00 p.m. at Porto Funeral Home, 830 Jones Hill Rd., West Haven. Beecher & Bennett Funeral Home is in care of the arrangements. Memorial donations in Irene's name may be made to St. Barbara Greek Orthodox Church.