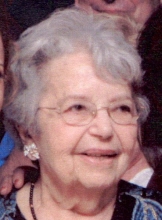 Irene M. Mezei Sasso, 87, of 44 Huntington Circle, Hamden, CT. passed from this life March 14, 2008. She was the loving wife for 54 years of the late Albert Sasso; devoted mother of Barabara LaPaglia and Laraine Sasso both of Wallingford and Robert and his wife Kathy Sasso of East Lyme; cherished grandmother of Dr. Lauren and her husband Scott Romano, Stephen LaPaglia, Kelly Sasso, Katherine Sasso and Michael Milazzo and sister of the late Anne Cassella and Joseph Mezei. Born in Wallingford February 19, 1921, she was a daughter of the late Joseph and Mary Kedves Mezei. Irene was a resident of Wallingford before moving to Hamden in 1959. Irene was at one time employed by the former A.C Gilbert Co. of Hamden and a longtime communicate of St. Joan of Arc Church, Hamden. Funeral from BEECHER & BENNETT , 2300 Whitney Ave., Hamden, Monday at 9:15 AM. Followed by a Mass of Christian Burial at 10:30 AM in The Most Holy Trinity Church, Wallingford. Friends may call at the funeral home Sunday from 5 to 7 PM. Burial will take place in St. John's Cemetery, Wallingford. Contributions in Irene's memory may be made to the Most Holy Trinty School- 68 North Colony St. Wallingford, CT. 06492.