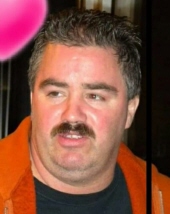 Irvin L. 'Jiggie' Brady, III, 47, lifelong resident of Meriden, passed away at his home on Thursday, February 15, 2018. Born in Meriden on February 27, 1970, he was a son of Sheila (Howard) Brady of Lewiston, ME. and the late Irvin L. Brady, Jr. He is survived by his siblings, Nancy Brady of Auburn, ME, Lisa B. Fancier of Wallingford and Robert Brady of Lewiston, ME. He also leaves several aunts, uncles, cousins, nieces and nephews and his best friend, Julio Ramos of Meriden. Jiggie had been an employee at the McDonald's Restaurant on East Main Street, Meriden for 20 years. Celebration of His Life will be held on Friday, February 23, 2018 from 5:00 to 7:00 PM at Beecher & Bennett - Flatow Funeral Home, 48 Cook Ave., Meriden.