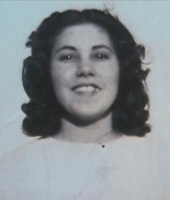 Isabella Ardito DellaRocco, 96, of Hamden, entered into eternal rest on Saturday, April 19, 2015. She was born on August 17, 1918 in New Haven, the daughter of Cosmo Ardito and Marian Battlene-Ardito of Hamden. Wife of the late Alphonse DellaRocco, Mother of Lenore(Richard) Carlson, Salvatore (Valerie) DellaRocco, Lucille (Michael) Primicerio and the late Alvera (Fran) Klos, all of Hamden. She was the Grandmother of Raymond, Alphonse, Dawn, Lucy, Kristy, Jennie, Teresa, Fran, Korri, Julie & Jessica. Great-Grandmother to Frank, Alan, Larry, Maggie, Kaley, Taylor, Victoria, Stephanie, Anthony, Luke, Isabella, Aiden, Sal, Michael, Nicholas & Caden. She also leaves several nieces and nephews. Sister of Delores Banks, Tony & Eddie Ardito. Pre-deceased by Cosmo Jr., Ralph, Joey & Julius Ardito, Jennie Petonito & Phyllis Allen As a young lady, Isabella worked as a Nanny for several families. Her last job was as a Nanny for the Coleman Family in Hamden. She worked for them for several years. She always thought of them as her extended family. Mom (Grandma, Noni) you were an angel who walked among us. The greatest blessing God had ever given. No words could ever express the sorrow we feel. You will forever be in our hearts, we will never forget you. You were our most darling Mother, Grandmother, Great-Grandmother, Sister & Aunt. You were our truest friend. Friends may attend her Graveside Ceremony on Friday, April 24th at 11:00 AM in St. Mary's Cemetery, 3124 Whitney Ave, Hamden. Arrangements are in care of Beecher & Bennett Funeral Home, 2300 Whitney Ave., Hamden.