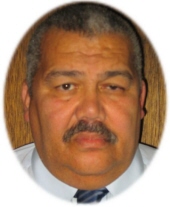 Israel Pabon, Sr. passed away July 18, 2008 in Midstate Medical Center. He was the husband of Maria Rodriguez Pabon. Israel was born in Yabucoa, Puerto Rico a son of the late Herminio Pabon and Antonia Carrasquillo. He is the father of Mily Pabon, her husband Joel Morales, Israel Pabon, Jr. all of Meriden and Eliezer Pabon, his wife Anna I. Vazquez of Middletown and brother-in-law of Rev. Jose Rodriguez of Meriden. Israel also leaves 5 grandchildren, brothers and sisters in Puerto Rico and several nieces and nephews. Israel was a former machinist and police officer in Puerto Rico until a disability in 1984. He was a US Army Vietnam Veteran. His funeral service will be held Wednesday at 10 a.m. in the BEECHER & BENNETT - FLATOW Funeral Home, 48 Cook Ave., Meriden. Friends may call at the funeral home Tuesday from 5 to 8 p.m. Burial with Military Honors will take place at the State Veteran's Cemetery in Middletown.