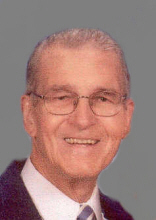 Ivar H. Henrickson, Jr, age 91, of Cheshire, formerly of Northford, passed away on Sunday October 10, 2010 following an automobile accident. He was surrounded by his family. Ivar was a son of the late Helga Anderson Henrickson & Ivar H. Henrickson, Sr. He was born in New Haven in 1918, moved to Hamden as a child and graduated from Hillhouse High School in 1936. He earned an Associate Degree in accounting in 1941 from YMCA Junior College (now the University of New Haven) and was granted an honorary Bachelor's Degree from the University of New Haven in 2009. Ivar served in the Army Air Force as a bombardier in England during World War II, where he attained the rank of Second Lieutenant. He worked as an accountant for High Standard Mfg. Co, as assistant treasurer for Steinbach Printers and as Treasurer for New Britain Machine Company before retiring in 1985. Ivar was a life-long member of Bethesda Lutheran Church in New Haven, singing in the choir for over 60 years, serving as treasurer for several years and chairman of the board. He was also treasurer of the North Branford Library Board for many years as well as board chair. Ivar is survived by his loving wife of 65 years, Betty Jacobson Henrickson; his children, Karol Dow & her husband Alan of South Windsor, Kristen Weaver of East Hampton, Ivar 'Chip' Henrickson III of Westbrook & Peter Henrickson of Dacula, GA; his grandchildren, Charles Wojack (Michelle), Karin Garrison (Kevin) & Amanda Cardot (Bobby); his great grandchildren, Kohl, Karina, Angelina, Madeline, Nicholas and Jayson; his sister Verna Carlson of Milford, NH; his brother Robert Henrickson of Manchester, CT and numerous nieces & nephews. He was predeceased by his son-in-law Rev. Elon Weaver. Ivar was a rare man - honest, kind, loyal and very loving. He will be greatly missed by all who knew him. Per his request there will be no calling hours. A memorial service will be held on Saturday, Oct. 16, 2010 at 2:00 PM at the Bethesda Lutheran Church. Burial will be private. In lieu of flowers the family request donations to Bethesda Lutheran Church, 305 St. Ronan Street, New Haven, CT 06511. Arrangements are in care of BEECHER & BENNETT, 2300 Whitney Ave, Hamden.