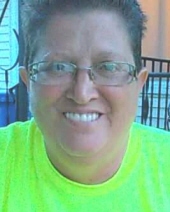 Jacqueline Barbara Sykes, age 56, of Meriden, passed away unexpectedly on Wednesday December 20, 2017. She was born in New Britain on July 3, 1961 to the late Russell and Barbara Ziegler Sykes. She is survived by her son George Glenn of Meriden, grandson Nathan Glenn, and dear friends Melissa Horsfall and Dawn Way. Besides her parents, she is predeceased by her brothers, Anthony Sykes and Richard Ziegler Jr. Jacqueline graduated high school from E.C. Goodwin in New Britain, CT. She eventually went on to become supervisor in the Dept. of Mental Retardation at the Southbury Training School, where she worked for many years. Jacqueline was an avid animal lover, and the many friends she leaves behind will all miss her kind, loving, caring, and giving spirit. They would like to give special heartfelt thanks to Jackie’s nurses of New England Home Care, Cindy Rabago and Candy Gilbert. Friends are invited to attend a Memorial Service celebrating Jackie’s life on Thursday, December 28, 2017 at 6 pm in Immanuel Lutheran Church, 164 Hanover St., Meriden, CT 06451, and are welcome to stay for a gathering in the church hall following the service’s conclusion. In lieu of flowers donations in Jackie’s memory may be made to the Meriden Humane Society, 311 Murdock Ave., Meriden, CT 06450.