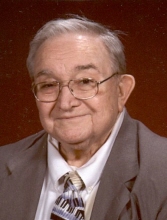 James Alfred Stevens, 81, precious husband of 60 years to Rosamond Prussmann Stevens of North Haven passed away at CT Hospice in Branford on March 19, 2009. He was born in Boston, MA on January 12, 1928 to the late Samuel and Elsie Withrow Stevens. Besides his wife, Jim is survived by his two daughters and their husbands, Melodie and Ronald Penton of North Haven and Maribeth and John McEwan of Meredith, NH. Grandchildren, Michael Penton and his wife Kerry of Hartford, Timothy Penton and his wife Maria of Wallingford, Jinny Penton of North Haven, Richard and James Galbraith of Austin, TX, and Amanda Hayden of Lexington, MA. Great-grandchildren, Abby, Taft, and Luke Penton, Joshua, Chloe, and Zula Galbraith, and Allison and Molly Rusgrove. Predeceased by a son, Richard D. Stevens and a granddaughter, Kathleen Hayden. After high school Jim joined the U.S. Navy where he was a Chaplains Assistant. He then continued his education at the New England Conservatory of Music where he graduated in 1950 with a Bachelors in Education. In 1962 he graduated with a Masters in Education from Bridgewater College. Jim had a love and appreciation for music that started at the young age of three when he began studying piano and then the organ at age seven. He used his teaching skills to musically educate thousands of students while holding the position of Music Supervisor in Bourne, Sandwich, and Mashpee, MA. He also taught music in Falmouth, MA at the Cape Cod Conservatory of Music and Art and was a private piano and organ teacher for over 40 years. Other experiences included Director of Lawrence High School Band, founder of Lawrence High School A Cappella Choir, Organ and Choir Director at numerous churches in Massachusetts, on Cape Cod, and in North Haven at St. John's Episcopal Church where he has been a member for the last seven years. In 1957 he revived the Falmouth Town Band, volunteering his time and talent. Jim gave an organ recital at the Old North Church in Boston and Served as Pianist for the Novikov Russian-American Ballet Theater. In 1985 he was recognized by the Falmouth Chamber of Commerce and the MA State Legislature for contributions to the Musical Life of the town of Falmouth. He was a 50 year member of the Independent Order of Odd Fellows and Marine Lodge AF & AM where he was a past Master. He served on the State of Massachusetts Mason Degree Team and was a past High Priest of the Royal Arch Chapter. Jim and his family lived in Falmouth, MA for over 50 years before moving to North Haven in 2002. A Memorial Service will be held at St. John's Episcopal Church, 3 Trumbull Place, North Haven on Sunday, April 5th at 2:30 p.m. BEECHER & BENNETT 2300 Whitney Ave., Hamden in care of arrangements. In lieu of flowers memorial contributions in Jim's memory may be sent to St. John's Episcopal Church, 3 Trumbull Place, North Haven, CT 06473.