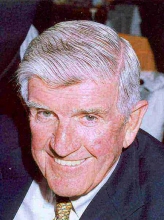 JAMES B. CURTIN North Haven- James Bernard Curtin, 76, loving husband of 43 years of Jeanne Fountain Curtin of Mt Carmel Ave, passed away peacefully surrounded by his family Saturday December 17, 2005 in the Masonic Geritaric Healthcare Center after a long illness. In addition to his wife he is survived by two sons James ( Melissa) Curtin of South Norwalk, Peter Curtin of Hamden, a daughter Cynthia (Ihab) Barrawi of Stamford, and a sister Elizabeth O'Brien of MA. He was predeceased by a sister Maureen Markovitz, and 4 brothers Edward, John, Peter, and Robert Curtin. He was born in Hartford January 28, 1929 a son of the late Edward and Mary Carr Curtin, attended Trinity College on a basketball scholarship and was inducted into the Trinity College Basketball Hall of Fame. He recieved his B.S. degree from Trinity College and his Doctor of Juris Prudence from the University of Connecticut. During the Korean conflict he served in the US Army, First Lieutenant, 5th Div. Infintry. Mr. Curtin retired from the former Southern New England Telephone Co. as Vice President and General Counsel in 1991. He was an arbitrator for the American Arbitration Assoc., the Connecticut State Board of Arbitration, the Better Business Bureau, and was a member of the CT Bar Assoc. He was a member of the New Haven Country Club, was Club President in 1988, and won numerous tournament victories. Mr. Curtin was a member of the North Haven Democratic Town Committee, and served on the Board of Directors of the St. Raphael Hospital Foundation, the Boys & Girls Club of New Haven, and the Trinity College Alumni Assoc. He had also been a coach in the Max Sinoway Little League Baseball Assoc. The Curtin Family would like to thank the entire staff on Sturgess# 3 MGHCC for their loving care for Jim and his family. Funeral from BEECHER & BENNETT, 2300 WHITNEY AVE, HAMDEN, Wed. Dec. 21, at 9:15 am. Mass of Christian Burial will be Celebrated in Our Lady of Mount Carmel Church, Hamden at 10 am. Friends may call Tuesday from 4-8pm. Interment will be in All Saints Cemetery. Memorial contributions may be sent to the Fr. McGiviney Cancer Center, 1450 Chapel St. New Haven, CT 06511, or to the Masonic Charity Foundation, P.O. Box 70, Wallingford, CT 06492. For information or to send a condolence please see obituary @ www.beecherandbennett.com.