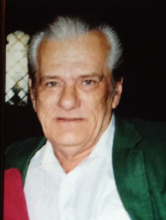 Meriden- James C. Strom, 77, husband of Aida (Rivera) Strom passed away on Wednesday, April 6, 2016. He was born August 17, 1938 in West Hartford, CT; a son of the late Carl and June (Czyz) Strom. James proudly served his country in the U.S.Navy. He had a great passion for horses his entire life. In addition to his wife Aida he is survived by a daughter, Yolanda Traverso and her husband Craig Ursini of Meriden, a son, Wilfredo Traverso of Wallingford, three granddaughters, Kristine, Crystal and Destiny, and two sisters. He was predeceased by a grandson, Anthony Gonzalez. A graveside service will be held on Tuesday, April 12, 2016 at 10:30am at Sacred Heart Cemetery, Meriden. There will be no calling hours.