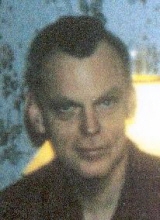 James E. Brown, 89, of West Haven, husband of the late Lois Winterhalder Brown passed away July 6, 2005 at the West Haven VA Hospital. Father of Frederick G. Brown of West Haven, brother of Maurice V. Brown of West Haven, loving brother-in-law of the late Helen Brown, uncle of Paul S., Stiles and Eric Winterhalder, Leonard M. and Douglas Pick, June W. Savoy, Joyce Marganski and Lorraine Skibitcky. Also survived by 15 grandnieces and grandnephews and his loving cat, Gracey. James was born in Waterbury, CT July 12, 1915 a son of the late Guy H. and Anna Dee Brown and was a veteran of WW II in the Army Air Corps. He graduated of New Haven College and was corporate purchaser for the former Armstrong Rubber Co. for 26 years and retired in 1983. He was a member of the Civil Air Patrol and assistant Scout Master of Troop #9 of West Haven. Funeral service and burial was private and under the direction of BEECHER & BENNET TAYLOR FUNERAL HOME, 410 Campbell Ave., West Haven. Contributions may be made in his memory to the American Cancer Society, 538 Preston Ave., Meriden, CT 06450 or the charity of one's choice.