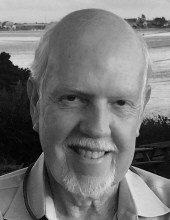 James Ibsen MacWilliam passed away peacefully at the age of 71 on March 13, 2019 after a courageous six-year battle with cancer. His daughters and sons-in-law, Susan and Asher Nichols and Devon and Jesse Villarreal, join with all those who knew and loved him in mourning his death. Jim was born on October 16, 1947, in New Haven, Connecticut. His parents, James Douglas (Doug) MacWilliam and Esther Louise MacWilliam (nee Ibsen), raised him lovingly on Hartford Turnpike in North Haven, surrounded by extended family. In 1965 he graduated from North Haven High School, and in 1970 he earned a bachelor's degree in industrial engineering from Northeastern University. For over 40 years, Jim owned his own business out of Newton, Massachusetts as a broker for paper-converting machinery, a job which took him around the world and fostered lasting relationships. A naturalist, Jim used his extensive knowledge of gardening and fishing to harvest ingredients for his specialty dishes including strawberry-rhubarb crisp, marinara sauce, and grilled tuna. He loved coral reef SCUBA diving, water-skiing, and everything else on the ocean. He maintained a salt-water fish tank for decades. He had particular soft spots for Labrador retrievers and birds, especially Purple Martins. Jim's Martins returned each summer from South America to the house he built for them near his Wakefield, Rhode Island home. Inspired by the birds' annual migration, he travelled to natural landscapes such as Antarctica and the Galapagos. During his life, Jim's generosity overflowed to his children and their children, friends and their friends. A supporter of charitable and educational organizations, he served on the Board of the Jerry Brown Farm Association for nearly 20 years. He volunteered for extra tests and treatment to advance prostate cancer research at the Dana Farber Cancer Institute in Boston, Massachusetts. In the fall of 2008, he moved to Florida for a month to canvass for the Obama presidential campaign. Even as his health was declining, Jim expanded his horizons. He travelled to Cuba with his partner Patty Kantlehner to embrace local art and music. They dropped anchor at places like Block Island and Cape Cod to enjoy riding bikes and visiting family. Susan and Devon and their mother, Laurie Hudson, and Jim's step-daughters Mara Ostro and Rebecca Nagata and their mother, Janet Ostro, appreciated his sound advice concerning all topics ranging from career decisions to driving directions. His legacy lives on through his five young grandchildren: Charlotte, Alexander, Elizabeth, Jesse III, and James, and his six step-grandchildren. They will learn to listen to birds, seek the ocean, and shoot for the moon. Jim is buried alongside his parents at Beaverdale Memorial Park in New Haven, Connecticut. In lieu of flowers, please direct any donations in Jim's memory to the South Kingstown Land Trust or Animal Rescue Rhode Island.