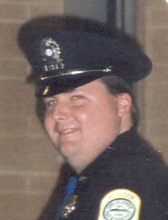 James Joseph Mills, HPD, age 45, passed away at his home on Friday, November 6, 2009. He is the beloved husband of Vittoria Scirocco Mills of Hamden. Jim was born in New Haven on April 22, 1964, a son of the late Ret. Capt., NHPD Wilfred Mills and Estelle Kikowski Mills. In addition to his wife he leaves two cherished sons, Anthony James 'AJ' and Christopher Michael Mills with whom loved spending time with and coaching their baseball and football teams. He was the brother of Susan Writer and her husband James of MD, Wilfred 'Bill' Mills and his wife Susan of PA, son-in-law of Antonio and Luisa Scirocco, brother-in-law of Claudio Scirocco and his wife Lauren and Teresa Sinapis and her husband Steven all of Hamden and also leaves several nieces and nephews. Jim was a longtime resident of Hamden and Cheshire and a graduate of Notre Dame High School in West Haven . He was a Police Officer with the town of Hamden for 22 years were he spent numerous years as a motorcycle officer as well as a field training officer. He received many letters of recognition and was awarded Police Officer of the year in 2005. He coached football and baseball in the Hamden Fathers and Cheshire Youth Baseball leagues and football at the Hamden Middle School . His funeral will leave from BEECHER & BENNETT FUNERAL HOME, 2300 Whitney Ave. , Hamden on Tuesday November 10, 2009 at 9:00 am followed by a Mass of Christian Burial at 10:00 am in The Church of The Ascension, 1040 Dunbar Hill Rd. , Hamden . Interment will follow in Beaverdale Memorial Park , New Haven . Friends may call at the funeral home on Monday from 4:00 to 8:00 pm. In lieu of flowers contributions in his memory may be made to the James J. Mills Education Fund and sent to New Alliance Bank, 2856 Whitney Avenue, Hamden, CT 06518.