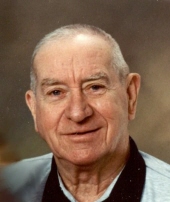 James Joseph O'Connell, 92, beloved husband of 66 years to C. Muriel Visel O'Connell passed away March 19, 2012 after a brief illness. Loving father of Karen O'Connell of East Haven, Jay O'Connell and his wife Claudia, of Hamden, and the late Robert O'Connell. Grandfather of Kathleen, Meredith and Matthew James O'Connell, David and Ryan Mingrone. Brother of Pat Decker and Jane Park both of Hamden, and the late Sue Holcomb and Thomas O'Connell. He is also survived by many long time friends. He was born in New Haven February 10, 1920 a son of the late James and Irene Oates O'Connell and was a life long Hamden resident. He proudly served in the US Army during WW II as a sergeant in the Pacific Theater. Mr. O'Connell was a self employed plumber, and was later employed by the Hamden Board of Education as a plumber from 1970 until his retirement in 1990. James was long time parishioner of Blessed Sacrament Church, a member of the B.P.O.E. #2224 of Hamden, American Legion Post # 88, and was a life long avid Red Sox fan. Funeral from BEECHER & BENNETT, 2300 WHITNEY AVE., HAMDEN, Friday morning March 23 at 9:15 am. Mass of Christian Burial will be celebrated in Blessed Sacrament Church at 10 a.m. Friends may call Thursday from 4-7 p.m. Interment with Military Honors in All Saints Cemetery. Contributions in his memory may be sent to the Leukemia Society of America, 300 Research Pkwy., Suite 310, Meriden, CT 06450.