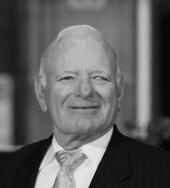 James Lamberti, Jr. of North Haven, beloved husband of Lucille Possidente Lamberti for 51 years, died on April 3, 2008 after a brief illness. James was the son of the late James and Anna Vanacore Lamberti. He is survived by his son Dr. David Lamberti and his wife, Mary Pat, of Madison; his son William Lamberti and his wife, Christine, of Wethersfield; and his daughter Jane Lamberti Sams, Esq. and her husband, Warren III, of Atlanta, GA. He is also survived by his six adored grandchildren, Christopher and Marielle Lamberti; James and Katherine Lamberti; and Warren IV and Elizabeth Sams. In addition, he leaves his brother Matthew, and sisters Bea Civitello, Alice Leishman, and Marjorie Lamberti. Jim is a graduate of the University of Connecticut and received his master's degree in Statistics and Applied Mathematics from Rutgers University. He retired from Pratt and Whitney, East Hartford, where he was Manager of the Statistical Quality Control Department. After retirement, he was a consultant for Sikorsky Aircraft. He also was a distinguished adjunct lecturer at UNH, UCONN, University of Hartford and Butler College, teaching his favorite subject, Statistics. As an avid sailor, Jim was a member of the Branford Yacht Club. He also belonged to the Laurel View Country Club where he served as President of the Golden Age Group golf league. He even achieved a hole-in-one while vacationing in Florida. In addition to sailing and golf, he enjoyed skiing with his wife, children and grandchildren on the slopes of Vermont. He was a true family man. A Mass of Christian Burial will be celebrated Monday, at 10:30 AM at St. Rita's Church in Hamden. Burial will follow at All Saints Cemetery in North Haven. Calling hours are Sunday, from 4-8 PM at BEECHER & BENNETT, 2300 WHITNEY AVE., HAMDEN. In lieu of flowers, the family requests that donations be made to CT Hospice www.hospice.com or Pancreatic Cancer Action Network, www.pancan.org.