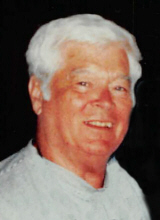 James W. Morgan, 90, a lifelong resident of Hamden, passed away at Connecticut Hospice on Saturday, November 22, 2014. He was the beloved husband of Dorothy O'Brien Morgan of Hamden for 65 years. Born on June 8, 1924, he was the son of the late Evan E. and Hazel R. Conroy Morgan. He is survived and will be dearly missed by his children; daughters, Karen (Mark) Nash and Mary Jane (Christopher) Lyons, both of Hamden, and son Lt. David Morgan NHFD (Ret.) of Florida, as well as 8 grandchildren; Corey Nash, Justin Nash, David Morgan Jr., Ryan Morgan Launder, Brett Morgan, James Onofrio, Michael Lyons, Matthew Lyons and 5 great-grandchildren; Emily, Connor, Savannah, Ian, & Logan Nash. He is also survived by a sister, Kathryn Kelly, of Albany, NY, and several nieces & nephews. James was employed by the Town of Hamden for 30 years as a custodian for the Hamden Middle & High Schools. He was a proud veteran of the US Navy, having served in both WWII and Korea. His time in the service was one of his greatest accomplishments, the other being his family. He will always be remembered as the 'Bacon Grandpa' of their Saturday morning breakfasts alongside Dorothy's 'Candy Grammy.' He was also a member of the Hamden Elks BPOE 2204. Additional thanks to his special friends over at Hamden Florist. Friends may visit with his family from 3-7 PM on Monday, November 24 at BEECHER & BENNETT, 2300 Whitney Ave., Hamden. His Mass of Christian Burial will be held at 10 AM Tuesday at St. Rita's Church, Hamden. Burial with Military Honors will follow at St. Mary's Cemetery. In lieu of flowers, contributions in his memory can be made to Til Duty is Done, P.O. Box 539, Cheshire, CT 06410 or given online at www.tdid.org.