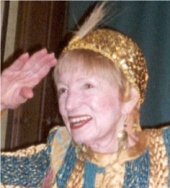 Jane B. Willoughby died peacefully at home in North Haven on June 19th, 2010. Born in Toledo, Ohio in 1921, she graduated from Miss Hall's School and Smith College with a degree in political science. Her real love was art, and she took classes at The Art Student's League and The New School in New York after her marriage in 1943 to Charles L. Willoughby, and pursued a successful art career for the rest of her life. In 1951, she moved to New Haven with her family and became intensely involved in the art community. In 1975, she was honored with the New Haven Arts Council Award for Leadership in the Arts. She was a member and teacher at The Silvermine Guild of Art and the Viridian Gallery in New York. Her work is in collections worldwide. In spite of her tiny physique, she was a dynamo to all those with whom she had contact. A staunch supporter of just and equitable social principals, she exemplified her beliefs to her friends, family and the community at large. Nimble as a pixie and always challenging conventional wisdom, she looked at life from myriad perspectives, even upside down, and she encouraged intense discusssion and debate at all gatherings. Her fashion sense lit up any event. She and her husband Chuck were well known for their generosity and hospitality. The Willoughbys have a extended family with many adopted and cherished members who adored its matriarch and looked to her for wisdom, guidance and her unique sense of humor. In 1996, she founded Mory's Merry Widows after her husband's death. Jane will be sorely missed by her family and friends. She is predeceased by her husband, Chuck, and her son, Kip, and leaves behind two daughters, Pamela Field and Elizabeth Willoughby, her sons-in-law, and three grandchildren. A private family burial will take place this week, and a memorial service is planned for a later date. In lieu of flowers , please send a donation to the Smith College Club of Greater New Haven Scholarship Fund, 211 River Road, Madison, CT 06443, c/o Josefa Abdelnour, or to the Creative Arts Workshop, 80 Audubon Street, New Haven, CT 06510. Arrangements in care of BEECHER & BENNETT FUNERAL HOME, 2300 Whitney Avenue, Hamden.