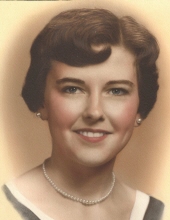 Jane (Copeland) Trevett, age 84, of Woodbridge went to heaven Friday, April 13, 2018. Born in Medford, MA on June 14, 1933, she was the daughter of the late Reginald and Marion (Donahue) Copeland. She was the devoted wife of John 'Jack' Trevett for 62 years, 11 months. Jane is also survived by three sons, Roger Trevett of Midway, Utah, Paul Trevett of Woodbridge, and John Trevett of Bethany; three grandsons Jonathan, Steven, and O'Shea Trevett; and her brother Richard Copeland of Naples, FL. She was predeceased by her brother Robert Copeland. Jane and Jack had a lifelong love of sailing and skiing. They were proud members of the Milford Yacht Club, where they sailed together for 45 years. Jane was active in Woodbridge politics where she served as president of the League of Women Voters. In addition to raising three boys, Jane had a very productive professional life. Jane co-founded the Greater New Haven Celiac Group in 1996, where she promoted awareness throughout the community and beyond. She will be remembered for the boundless love she had for all, and for the values that she instilled in her children that are now passed on to her grandchildren, who were the apples of her eye, and now her legacy. All are invited to attend her Mass at Our Lady of Assumption Church, 81 Center Road, Woodbridge on Saturday, April 21, 2018 at 11:00 AM. Her family will receive friends in the church vestibule beginning at 10:30 AM prior to Mass. Interment will follow in Northwest Cemetery, Woodbridge. In lieu of flowers, contributions in Jane’s memory may be made to Our Lady of Assumption Church, or to a charity of one’s choice. Family contact is John Junior at 203-400-4403 or johntrevett@live.com.