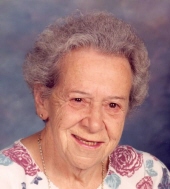 Meriden - Jane Scarfo, 86 wife of the late Pasquale N. Scarfo passed away peacefully on Saturday, October 11, 2008 at Westfield Care and Rehab in Meriden. She was born January 13, 1922 in Meriden a daughter of the late Dominic and Theresa (Spampinato) Naples. Jane was member of the First Baptist Church and a former member of Grace Baptist Church. She had worked for JB Coggins Manufacturing until her retirement. She was a devoted wife, mother and grandmother and friend who will be deeply missed. The family would like to sincerely thank the staff of Westfield Care and Rehab for their care and compassion shown to Jane over the years. She is survived by two sons and their wives, Paul and Deborah Scarfo of Meriden and David and Donna Scarfo of Bristol, four grandchildren, Jennifer Potito, David Scarfo, and Paul and Brooke Scarfo and three great-grandchildren, Samantha Potito, Zachary Potito and Aiden Scarfo. She also leaves two sisters, Mary Koscuik and her husband Edward of Meriden and Frances Gentile of Florida, a sister-in-law, Eva Naples and a brother-in-law, Carmelo Scarfo as well as several nieces and nephews. She was predeceased by two sisters, Rose Riccitelli and Fannie Hybrenick and two brothers Nicholas and Anthony Naples. A Funeral service will be held on Wednesday, October 15 at 10am at First Baptist Church, 460 Broad St., Meriden. The Rev. Dr. Robert Prescott-Ezickson will officated. Burial will follow at Sacred Heart Cemetery. Relatives and friends may call at the Beecher & Bennett-Flatow Funeral Home, 48 Cook Ave., Meriden on Tuesday, October 14 from 4-8pm.