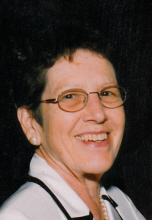 Janet C, Nolan, 84, wife of 60 years of Gerald J. Nolan of Hamden, passed away March 28, 2014 in the Mary Wade Home. She was born in Killingly, CT Dec. 19, 1929, daughter of the late Louis and Irene Martin Cote, and had resided in Hamden since 1954. Loving mother of Mark (Mimi) Nolan of Waukesha, WI, Scott (Judy) Nolan of Snohomish, WA, and Craig (Jackie) Nolan of New Britain, CT. She is also survived by 8 grandchildren and 4 great-grandchildren. After graduating from now Central Conn. State University, where she and Jerry first met, she taught at Killingly High School until her marriage. After marriage, she moved with Jerry to Aberdeen, MD, and was employed as secretary for the base Colonel at the Aberdeen Proving Grounds, where Jerry was stationed. After Jerry's discharge they moved to Hamden and Janet was hired as a substitute teacher for the Town of Hamden, a substitute teacher for the Hamden Adult Education program and she proctored the G.E.D. Exam for many years at Hamden High School. Janet had served as President of the Ladies Auxiliary of the West Woods Volunteer Fire Dept., and was a long time member of St, Joan of Arc Church. Janet enjoyed the many winters they spent in Florida and cherished the friends they made together during their travels each year. Her family would like to thank the compassionate staff at the Mary Wade Home for their dedicated care for Janet. Funeral from BEECHER & BENNETT, 2300 WHITNEY AVE., HAMDEN. Wednesday, April 2 at 9:30 a.m. Mass of Christian Burial in St. Joan of Arc Church, 450 West Todd St,, Hamden at 10 a.m. Friends may visit with her family Tuesday from 4-8 p.m. Interment in St, Mary Cemetery. Contributions in her memory may be sent to the Clelian Center, 261 Benham St., Hamden, CT 06514 or to the Alzheimer's Assoc. of CT, 2075 Silas Deane Highway, Suite 100, Rocky Hill, CT 06067.