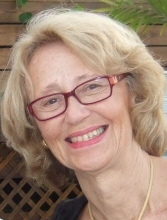 Hammond, Janet (nee LeDain), 80, of North Haven, CT, died peacefully at her home on Thursday, September 8, 2016, after a valiant battle with cancer. Born and raised in Montreal, Quebec, Canada, Janet was a graduate of The Trafalgar School for Girls and of Macdonald College of McGill University, both in Montreal. It was at McGill that Janet met Graeme, a 'handsome American,' to whom she was married for over 55 years. Together they traveled the world, enjoyed the Metropolitan Opera, threw lavish and memorable parties, loved the Adirondacks, delighted in the theater and movies, and raised two beautiful children. For many years, Janet enjoyed membership in: YUWO, where she served as president and advisor, was on the nominating committee, and headed the gourmet luncheon and ski groups; the Spring Glen Garden Club, where she served as president; the Yale New Haven Hospital Auxiliary, where she served as president and was on the Board of Trustees; and the North End Club. Janet loved gardening, sailing, skiing, traveling, antiques, new experiences, peanut butter, and maple syrup. She is survived by her loving husband Graeme, beloved daughter Wendy Wildes (Bob) of Acton, MA, beloved son Chris (Jennifer) of Powell, OH, and three treasured grandchildren. Memorial service to be held at Spring Glen Church in Hamden, Tuesday, October 18, 2016 at 10am. The family will receive friends from 9am to 9:30am at the church. In lieu of flowers, donations may be made in Janet's name to The Hole in the Wall Gang Camp, 555 Long Wharf Drive, New Haven, CT 06511 -- 203-772-0522 -- www.holeinthewallgang.org.